In April 2016, the National Pressure Ulcer Advisory Panel or NPUAP announced a change in the terminology and the stages of pressure injuries. Though these stages continue to include both unstageable pressure injuries and deep tissue pressure injuries the new definitions do not specifically mention the Kennedy Terminal Ulcer. Over the years, however, multiple panels and advisory groups have documented the Kennedy Ulcer as an end of life phenomenon.

The unavoidable skin breakdown that occurs as part of the dying process, known as a Kennedy Ulcer, has been recognized by Ostomy Wound Management since a 2009 journal article. Also in 2009, an expert panel released a consensus statement known as SCALE or Skin Changes At Life’s End which identified skin organ compromise occurring at the end of life. The panel recognized that the ulcer is usually seen on the coccyx or sacrum but has been reported in other anatomical areas and is usually associated with imminent death.

This special classification was also mentioned by the Center for Medicare and Medicaid Services (CMS) in 2014 within its Quality Reporting Program Manual and its Continuity Assessment Record and Evaluations Data Set (CARE) for long-term care hospitals. The “Coding Tips” of the publication noted if an ulcer was part of the dying process, developing from six weeks to two to three days before death, it should not be coded as a pressure ulcer.

ALN Consulting will continue to stay on top of these and other developments. Contact ALN Consulting if you have questions about a case and would like an initial consultation.

This portion originally published on October 26, 2015:
It is well known that a pressure ulcer is an area of skin that breaks down when pressure on the skin reduces blood flow to the area. However, the knowledge and acceptance of skin failure at the end of life from various etiologies, including the Kennedy Terminal Ulcer (KTU), is growing among evidence based practitioners. The Kennedy Terminal Ulcer and other unavoidable similar skin phenomenon such as Skin Failure, SCALE (Skin Changes at Life’s End), Deep Tissue Injury (DTI), and the Tremblay-Brennan Terminal Tissue Injury were addressed at the most recent VCU Pressure Ulcer Summit by experts and scholars in the field.

The Kennedy Terminal Ulcer was first described by Karen Lou Kennedy in 1989, and evidence of poor perfusion to the skin causing a pressure ulcer-like damage of soft tissue in serious illness and at the end of life is well documented. While there are several etiologies that could cause unavoidable skin failure, the Kennedy Terminal Ulcer is focused on soft tissue injury on bony prominences, usually on the sacrum, during the dying process.

As illustrated in the photos, the Kennedy Terminal Ulcer has a sudden onset of a purple/red blister or abrasion, and rapidly progresses to a Stage III or IV ulcer. While further research is required, and was recommended by the PU Summit, there is general consensus that if a dying patient has blood perfusion issues that affect many other organs, known as multi-organ failure, then it is reasonable to accept that the lack of blood perfusion also can affect the skin resulting in unavoidable soft tissue injuries, despite adequate prevention measures. 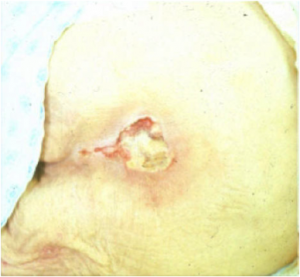 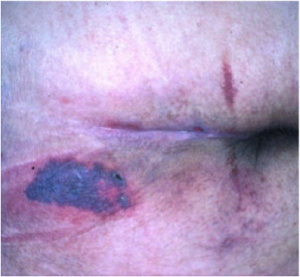 A phenomenon called “3:30 Syndrome” presented as a subdivision of the Kennedy Terminal Ulcer, which forms more quickly and appears as black spots. 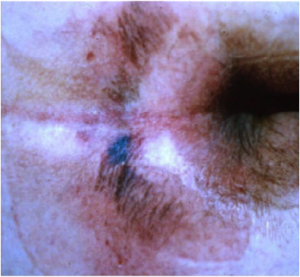 The classic “butterfly” or “horseshoe” shape of the Kennedy Terminal Ulcer.

In the near future the ANCC Magnet commissioners plan to develop and create access to a Magnet Designated Facility Database for hospital acquired pressure ulcers (HAPU) to promote ongoing research for unavoidable pressure ulcers and uncharacteristic soft tissue injuries that occur despite appropriate implementation and escalation of interventions to prevent skin injury and ulcers at the end of life.